Is Europe’s new agenda for sustainable growth and Circular Economy Action Plan going to spread prosperity or concentrate it? 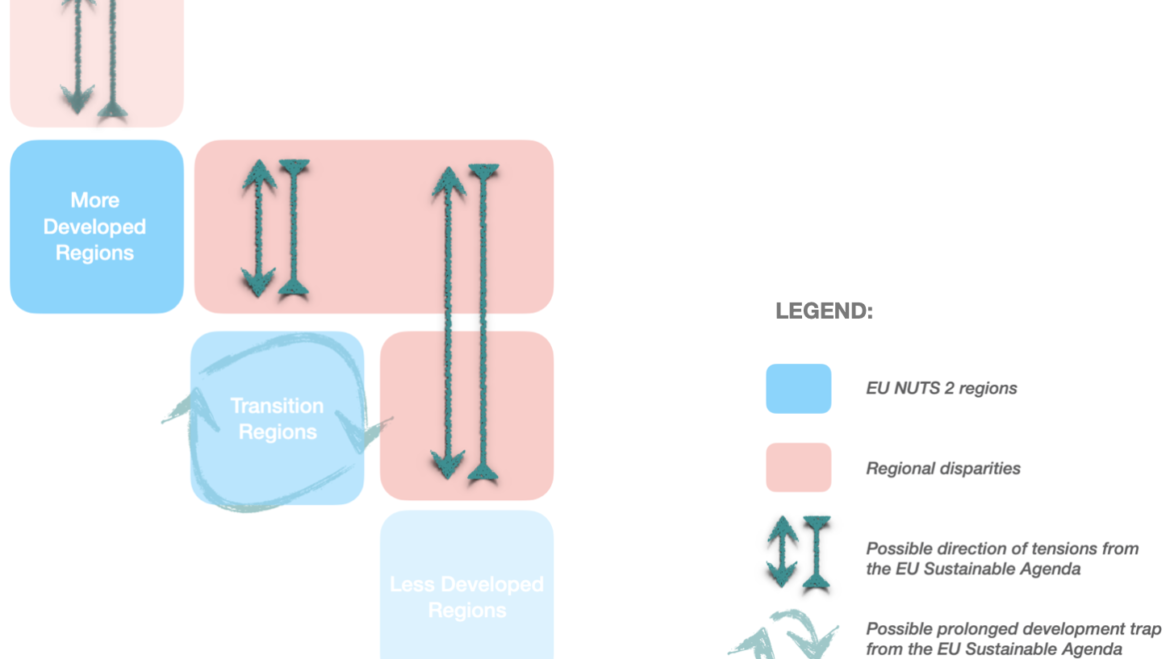 The economic development, social cohesion and political stability in the EU have been imperiled by the regional[1] economic divergence [1]. The last 50 years have seen increasingly rapid technological advances, globalisation and policy choices that gave rise of the so-called “great inversion” and “the new geography of jobs” [2], [3]. Once thriving rural and middle-to-small metropolitan areas are facing job losses, decreasing labour force participation or decreasing income per capita compared to the national average. In other regions an increasing employment might be observed on first sight, but in essence it is of low quality, concerning tedious and low-skilled occupations. On the other hand, a lot of large metropolitan areas along with their suburbs are ranking high as most vibrant places with lavish and lucrative employment opportunities [1].

Intra-country territorial polarisation has broadened – with a tendency of accumulating economic activity and wealth in large urban agglomerations, frequently capital cities; and numerous regions being stuck in “development traps” [4]. So far, the majority of economic policies and channeled funds have been directed towards two types of regions: the most prospective ones in terms of economic growth and development, and the indigent ones with substantial need of all types of endowment. Many regions have “fallen between the cracks”, since they were “neither large nor dynamic enough to attract investment, nor were they poor enough to warrant attention” [5]. Geography of discontent, an emerging phenomenon is observed in such cases, denoting the unhappiness and dissatisfaction of people living in these regions that experience a “development trap” [5].

Nevertheless, according to Iammarino et al., (2018) “the issue is not whether, at any particular moment, there is perfect regional convergence and equality in development levels: there never is. But rather whether the economy is spreading prosperity or concentrating it” [1].

As put forward by the World Economic Forum, the 21st century is marked by prosperity, inclusion, partnership and sustainability [6]. The environmental and climate-related concerns are positioning high in every political agenda, and related strategies addressing these pressuring challenges became intertwined with existing policies or stand-alone action plans. The European Commission, aiming to turn an urgent challenge into a unique opportunity, put forward the European Green Deal. A new growth strategy, which among other things, (a) has the goal to “transform the EU into a fair and prosperous society”; (b) needs to ensure a “transition that must be just and inclusive. It must put people first, and pay attention to the regions, industries and workers who will face the greatest challenges”;and (c) is “an opportunity to put Europe firmly on a new path of sustainable and inclusive growth” [7].

[1] The level 2 of the EU Nomenclature of territorial units for statistics (NUTS 2) is referred to as European regions.

About Sanja Arsova
Sanja is an ESR fellow at SEERC and a PhD candidate at the University of Sheffield. She got a First Class degree at the International Faculty of the University of Sheffield (City College, Thessaloniki, Greece) and during her BA in Business and Administration she has been awarded as a Highly Commended Entrant in Economics Category (2017) and Business Category (2016) from the prestigious Undergraduate Awards.